It’s been a while since i posted anything..5 mounth…lol..that’s a lot of time:D. Been busy. Work and love kind of get all my time, and sleep. I sleep a lot nowadays. I’m doing the living with ur bf stuff and i love it. I’m happy. Finally! 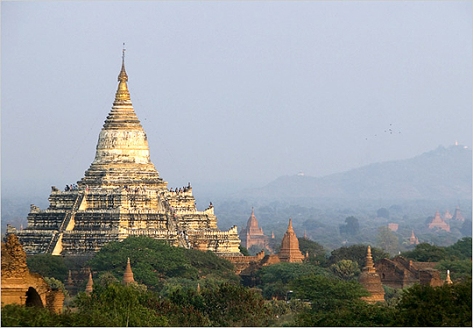 Anyway this post in not about me but about a book i just finished reading „Saving fish from drowning” by Amy Tan. It’s a very interesting book about a group of american tourists that disappear during their trip in Burma ( Birmania for us Romanians,i think this name is lovelier) .It got my attention because it was written from a dead person’s point of view, a friend of the tourist that follows them in Burma by soul and tries to help them in their difficult moments. The story itself isn’t so great as the description of the Burma lands . What made me keep reading it was learning more about Burma. I had heard about Burma before but i never gave it any importance, from another book i read when i was way younger, it was Nora Roberts i think, i don’t remember the title but i liked it a lot. I knew about great gems from that country. I had no idea it was in Asia. And i tought ppl that don’t know that Romania is in EUrope are dumb or ignorant, but i guess i am one 2. I didn’t know it was such a big country. I read that it is a very beautiful country and a rich one. Too bad the people have been living such hard times in there. I was shocked when i read on wiki that they were under military leadership until last year when they won some elections and finally got a parliament.

The military ruled Burma for 50 years. 5o years of killing and abusing the Burman ppl. I can’t believe there are still countries in this day when ppl are being murdered by the state. Now that almost all communist countries are democrats there are still states that suffer form pure stupidity and sadism.. And for what, money, big houses, fame, slaves? It’s so sad that other countries can’t really help the ppl. If the other nations would go in and fight the oppressors the people would still suffer, because thas how it is, they always suffer, no matter what, anytime a ruler is changed the ppl has to change with it. Imagine being raised in a country were almost any felony is punished by death and family members disappearing for some random words or beliefs and then when ur old and grey. Hopefully you will have living  offspring, and  everything changes. How can u be happy about the change when you didn’t know anything else but fear?

Romania was a communist country until 1989, i was 1 at that time, so i don’t know how it was back than. My parents, my grandmother told me stories. But i didnt live it so i don’t know how it feels. a lot of old ppl say that communism was better than now. When you don’t know what freedom is you don’t really need it i think. But times change and you have to follow them. Here the students had a riot in all the major cities, many have died being killed by their own army( the army of a state is for protecting it’s ppl, not killing them) But they achieved their goal and freed us . Communism , the general idea is not a bad one, i think(everyone being equal in all,even money), but ppl aren’t able to use it properly becauseour nature demands the ruler and possessor of things. I’m not a communist or anything i just observe the passing of time. In those days you were obligated to have a job, work. When you finished school you had a job waiting for you. Everyone worked, there were no beggars on the streets or thieves, they all had to work or else they were thrown in jail. You got a house from the state, an apartment, Ceausescu wanted to make all the ppl live in cities so he build a lot of blocks, some are abandoned now for not being finished and after the revolution everyone was to busy to stealing to construct anything. We had lots of plants , we produced anything we needed, we even had technology some of the more developed countries didn’t have. The Romanian ppl were a very proper and educated one. except for the beatings of children  and the lack of religion, religion was not allowed, it wasn’t recognized by the state. We only had communist holidays, no Christmas , noEaster. Everyone celebrated them but you didn’t get the time off for them. You were well paid, afforded to go in at least 2 vacations a year but you couldn’t buy chocolate or bananas. censure was at its peak but you didn’t have to worry about food for the next day, or clothes for ur children. You had money but not a lot of things to spend it on. Bribery was basically a pack of smokes, coffee, alcohol, there has always been and it will always be room for bribery, everywhere not just here. …….whoo..thank god for autosave..i just closed my browser accidentally;)).  PPl were less stressed and less ill and less fat those days. I heard about work camps for minorities but they were all hidden after the revolution so there are evidences but they are all hushed , they didn’t teach us about that in history class. But ppl weren’t killed in masses and girls weren’t raped and beaten.  People didn’t kill themselves or watch family members being raped than murdered in front of their eyes. How can these happen in this world, not even 5 years ago. nowadays they are free but they have so much to recover from. They have been set back for 50 years from the rest of the world. internet was illegal, so was freedom of speech. Burman military was really screwed up. If you look in google images for Burma you find pics of  beautiful landscapes and dead ppl. I just found a post about the Burman oppression  http://criticae.wordpress.com/2010/08/26/burmas-military-democracy/ . I hope that all countries that are living under oppression of any kind will be liberated and we shall become a selfless civilization that will care more about others than about possessions.  I don’t like it where the world is going, have more care less. I think it’s wrong and we should go back to our roots when a beautiful sunshine or a summer rain will make us happy . Not an ipad with internet and stuff. I like that we are all conected but i don’t want to live my life online. No good things ever came from being greedy and not caring about others , you get to kill hundreds of ppl just for power and estates , rule a country and destroy it from within. So i say read about Burma, know, maybe if we know we can stop further destruction of the world and we become better people. This is the age of knowledge, i hope the other one will be of action after knowing so much.

other link  about Burma’s oppression http://worldwithoutgenocide.org/current-conflicts/burma

Tell it to the frogs